The painting borrowed is a Princess picking lice from a troll. Jane Dougherty’s picture prompt press here to join in or read the responses. 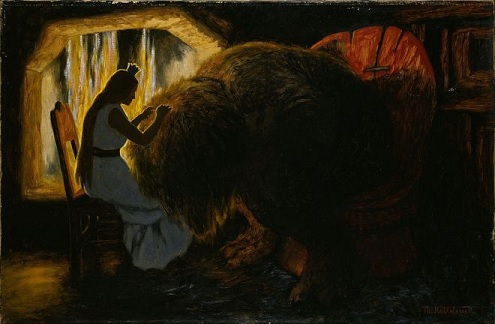 .The people of the kingdom thought it a pretty job being a Princess, opening buildings dancing with Princes. But behind the scenes under the castle but above the dungeons… this princess had her work cut out.

This place was where the true ruler lived if an agreement hadn’t been sought… if a truce hadn’t been struck, well it doesn’t bear thinking of. As with most Kingdoms, for a kingdom to become such,  the good has to prevail… hence the truce. In the throne room the king sits with his queen, they feel at ease, the princess is getting her training and  in turn keeps them safe. They have their kingdom so to all intents and purposes… all is good with their world; until.

Princess Romana,  takes off her crown slumps to the floor she crosses her arms. *thinks* why am I the one working so so hard, they sit atop their thrones being fed sweetmeats and dancing while listening to lively music, laughing at the jester’s amusing words. She scratched her head and shuddered… “yuk” she cried, looking at her hand crawling with lice; she ran to her chamber. Romana tugged at her braids and fought with her sash as her ladies, both gloved and aproned, pulled her a paraffin scented scolding bath. “Leave… all of you”  she scowled and clutched a bearskin to cover her pride. Once the water was bearable she eased herself beneath its depths. Tilly the maid, her friend and confidant pushed the huge oak door to see if it was safe to enter. Submerged beneath the stinking water with her nose like a reed poking up for air Romana sobbed. An hour later after being lathered and scrubbed until her skin was rough and raw, her hair combed with the finest of combs, and handfuls of her blonde hair had been gathered from the floor she still whimpered. Tilly stood her on a turning plinth and stroked soothing balm into the skin of Romana, and stroked her forehead until the shuddering stopped and she slept.

By the time the princess had cried silent tears and the bath removed from her room and scrubbed, the court had heard of her misfortune and demanded an audience with the king. On his knees before the king the lord trembled “Oh mighty ruler king of this land, I come on the say so of your court, I beg you to see through the impudence of my words and know they nieve as they are come from the love and caring we have for you and the kingdom.”  The King bellowed “Get on with it! But be aware, I will not be some weak minded pushover and though the executioner has been resting for many a year he is at my call”. The King sat stiffly and his fingers tightened on his sceptre as he frowned at the quivering shape before him. “We, your Royal highness, have learned today of the Princesses distress, we believe that time has come to put a stop to the distasteful tasks she undertakes. She one day will be queen and she too will have to subject her child to the same degrading filthy task. Lord, we beseech you enough is enough this cannot continue. We have knights trained and willing to fight. We have archers son’s of lord’s ready to fight for the princesses hand. All we ask is for our wonderous lord to think on the suggestion. Not waiting for an answer bowing to his knees eyes on his feet he slowly reversed himself from the great throne room.Once calmed the King summoned his wife his mother and his knight commander, over supper they talked, demanded and finally agreed that the Queen as was her duty would speak to the girl.

A pale unhappy Princess went to her mother’s chambers to seek comfort. The queen had agreed this task would be hers and hers alone. “Romana it has come to the attention of the court and indeed the land, of your unhappiness. She raised her hand to still her daughter. The knight commander has arranged for a challenge to be thrown down to the King of Trolls”.Romana gasped…”Yes, he who you groom and feed and care for in the undercroft;  below the banquetting hall. The knight who thwarts the troll will win your hand. Before she could get any further the Princes shouted.  “He will not! I refuse to be treated like a prize in an archery tournament”.The queen gestured her to sit, her high colour disturbed her greatly.” Let me explain” the queen said.  A truce was made when you were conceived that the child born of my loins would live until marriage to serve and groom him the king of Trolls. In return, the kingdom would be free of rampage and disease. Once you married, the fruit of your labour would take your place… so you could rule in the knowledge that you and your kingdom would be safe from The trolls evil”.Feeling pleased with her description the Queen relaxed, until…

“You mean I have been picking lice from his coat, wiping jam from between his toes,  spooning mucus from his nostrils, and picking the flesh from his teeth every day since forever, because the king was stupid enough to agree!” The Princess was incensed she strode up and down screamed and tugged her clothes, the queen thought she had gone insane. “Take me to father now” the queen twittered and trembled she pitter-pattered behind her furious daughter to the door of the throne room. Suddenly Romana slowed, looked thoughtful and taking her mother’s arm and guided her up to the solar. Romana had formed a plan she would not be a prize, only for the man she loved and certainly wouldn’t want to be seen as weak by those who one day would be her subjects. Her mind turned over her idea as she embroidered with the queen, as she stitched she planned and all the time she contrived to show her mother that she had changed her mind and agreed.

Some nights later, while the knights drew straws in the banqueting hall the thunder rumbled, Romana’s plan came to fruition. She collected the great helm with a huge spike a top, a hat she had the blacksmith’s son make in secret; and paid him a handsome sum. She lured the Troll undercover of darkness. They went by torch light up past the merlon to the parapet. The stupidity of the Troll amazed the Princess, he believed she had brought him there to gaze at the bridge where underneath his family lived. She convinced him they would be hoping to catch site of their great masterful Troll to bow before him this night, and so they could see him clearly he was to wear a helmet with a mighty spike fit or so she said for a king. The thunder made him jump, but she patted his hand and led him on. Once at the highest point, he leant out over the parapet at the princesses insistence. Just as he did a crack of lightening struck with humongous force. Romana fled just as the spike conducted the force into the hapless Troll, an almighty bellow shook the battlements people ran to the courtyard to gaze upon the sight of a burning bellowing beast tumbling into the moat. The heat sizzled and left the moat dry with the only remnant being the spiked helm embedded in the earth beneath the castle. Romana became the first woman to have the power of a king, and women’s rights movement was born, and today on this blog it is recorded as ‘The First Stand For Equality’.

Above is a vague likeness to the one used in my true fairytale the pictures are by way of pixabay. Of course, the actual one had a spike and we, unfortunately, have no recorded evidence as cameras smartphones or other photographic sorcery was at the time deemed evil. Thank you for reading your comments will be waited for in anticipation.

9 thoughts on “The First Stand For Equality”

Words and Images of Imagination