Charlie wasn’t keen on Christmas, because of the paper, the lights and all the waste, He didn’t think it good to eat so much, when others went hungry, It soured the taste.

Charlie loved wearing Granddad’s flight jacket, the best ever Christmas gift, Grandma said he wore it each day, walking back from his overnight shift.

The coat was cumbersome and heavy, if zipped it came past his throat. His arms needed to be longer, and the leather smelt like a dirty old Goat.

But Charlie could fit mucky Ethel, underneath it when the rain soaked all her card. Or the snow made her fingers go blue … as she sat in that old butchers yard.

He could fit a curled up ham sandwich and an apple from Grandma’s dish, Deep inside the fur lined pocket. And he made a new Christmas wish.

He wished that all people had bedrooms, a place to rest their head. That mucky Ethel could have a bath and a coat to hold over her own head.

But Santa, he did not come calling, to the people who lived on the street. Instead he hoped they would have their own Charlie, who would give the shoes from his feet.

I added a sound bite for anyone wanting to hear me read this. “Do you think a child has opinions on subjects such as this?” I would love a comment please 😁

This year my Christmas cards were bought to support Shelter, we sent them only, to close family and even closer friends. But I purchased one item a week and two when I could, th as extras to my weekly shopping all year. I googled a list of what I should get, to be sure I was providing what was most needed. I trawled charity shops for sturdy rucksacks once cleaned I stuffed them tight. A female sack was complete by August and delivered to the drop in center in our charming market town; you would not think there would be a homless problem here. Just before the cold of December a male back pack was ready to give, being near Christmas, I included a card, a tiny bear and a notebook and pen as extras. My gifts make me tear up as I write this, because who is to judge and it was so little for some but would mean everything to them. May this season and coming year bring roofs for the homless.

‘Think before you speak’

On a pavement Cafe at the end of the street, two smart men took themselves a seat.

Tristan, he bragged about his car, ‘£48000 look at it gleam, Mercedes coup’e a Successful man’s dream.’

Harry said ‘I worked hard taking overtime when I could. No room for a holiday or even a siesta.’ His £17000 spent on a pepper red fiesta.

They argued together, the for and against,
compared fuel consumption the weaknesses and strengths. 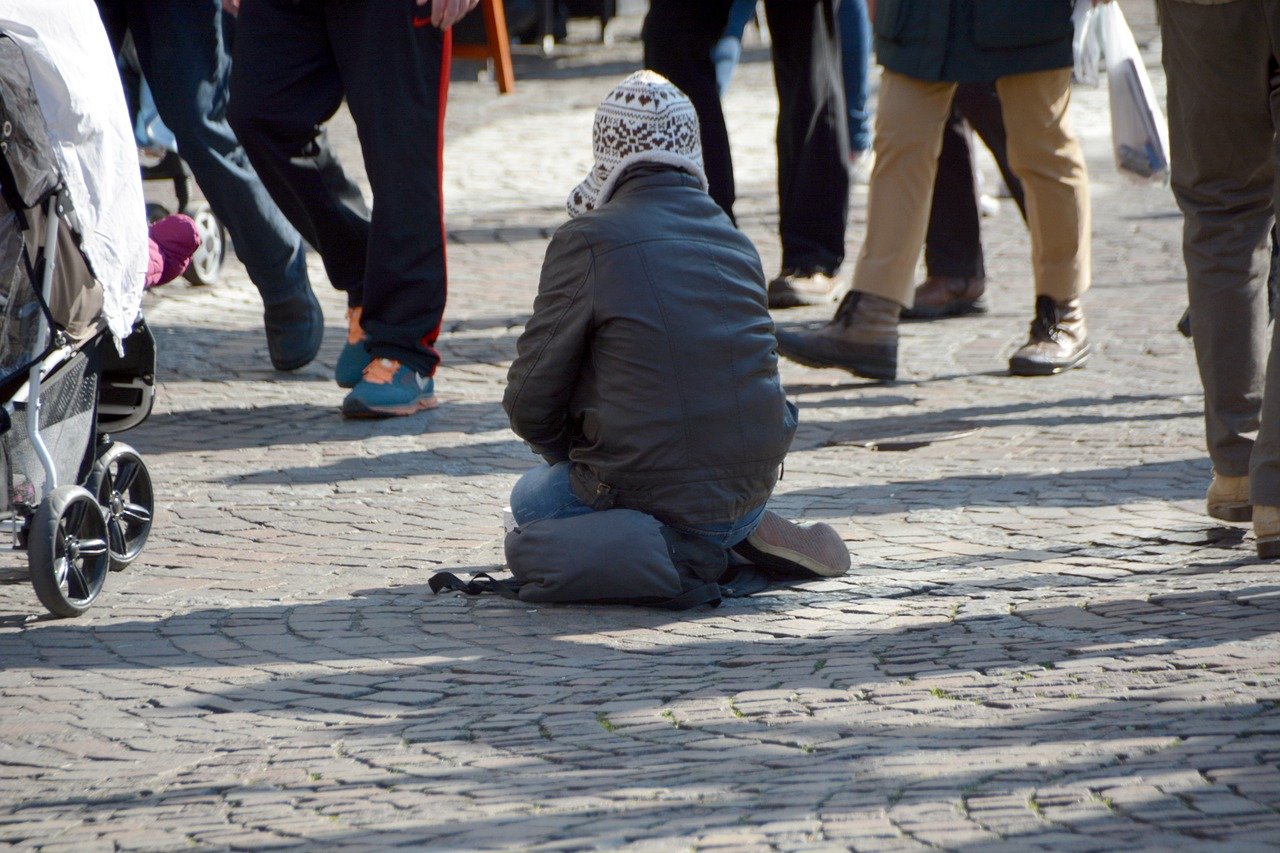 Now, Mary, she sat on the ground by the door

listened to them both open mouthed … in awe.

She sat head bowed by a note that said ‘park’ To remind her to get in her box before dark.

Her mac was large came down to her feet, an excellent choice, when you lived on the street.

for underneath, was all she possesses, two pairs of gloves and four threadbare dresses.

She didn’t speak nor look in their eyes when they lit cigars and binned crusts from their pies.

Silently she sat as they said their goodbyes. Missing the quiver of her lip and the tears in her eyes.

They dropped her a pound and crossed to their cars. She could have been an alien living on Mars.

Let me know what you think. Would you, in your excitement of the moment have stopped and looked at Mary? I’d like to think I would have taken my discussion inside, thought about how she would feel; overhearing.

Many thanks to Sandis Helvigs for loaning the photo.

He was bold he was cold he lived in a disguise.

He used a leaf to cover his eyes

A fancy dress parade was to follow the carnival. The Carnival comprised of floats and majorettes, brass bands, boy scouts, tumble tots and brownies not forgetting the women’s institute and the natty knitters. The music blared from speakers followed by dancing dwarves; who were following snow white on her bed. The shop doorways lined with stalls, mulled wine, hot soup, cards, gifts and all manner of cakes and crafts for sale.

They paraded through the town twice, full of fun and revelry. The floats were to be judged and prizes awarded. Collections for the hospice and the homeless had been going on several weeks before, and at the event. The parade culminated in the turning on of the Christmas lights by some vacant reality television star; that no one remembered.

As a watcher, I stood out, not dressed fancy or otherwise.Because of the cold all the clothes I owned I wore. As one of the recipients of the collections, I thought a few scraps of food would be given me, a few bits … to ease my bones in the late Autumnal weather. Especially knowing it was only going to get colder and harder sleeping rough.

I thought of the cost of the lights, music and costumes, I weighed up the fuel spent and calculated how much the prizes would be. In a previous time, I was a numbers man, a number cruncher and balancer of books. I wandered through the park to where finally the tractors rested their wheels and the children were reunited with parents and teachers. Backs were slapped, kisses freely given and received. Many prizes were happily accepted and some tears were shed in tiredness. Pride shone from the faces of people in fluorescent tabards who were clutching stuffed buckets of dosh.

I bent down and picked up a leaf, I twirled it in between frozen fingers, a beautiful Horse Chestnut leaf as big as a tea plate. The leaf was golden and rust, as if kissed by the turn of autumn its last disguise, before withering away. From my spot, I watched as a photographer took snaps of all he could see, a journalist took notes, then they spied me. I lifted the leaf to my face to hide, a voice asked: “Excuse me can I take a shot … what have you come as?” I stood still, my identity hidden from all but me. “Me,” I said, “I have come as autumn.” A look of confusion crossed his brow, he took the shot purposefully and slowly walked away. The girl tapped her pad with a chewed pencil she nodded my way. She glanced back once or twice as she disappeared into the crowd, I knew she was there somewhere, lost, like me, anonymous, unseen.

I wasn’t given any soup or mulled wine. The vicar scowled and turned away when I asked for a sleeping bag and a scarf. No eye contact was made, no smile thrown my way. I wondered what people thought their money would do, how much it would help … a man like me. Someone down on his luck, shabby, hungry and cold; wearing a disguise like autumn.

Please readers, let me know your thoughts, leave them in comments and I will get back quick sharp. Happy Autumn.

I laugh until the air has gone
Then gasp to draw some in.
Speaking makes me happy
my smile shines from within.
But tear drops plop shamelessly
on cheeks that are too old,
to bear the sight of homlessness
amongst streets  paved with gold.
With hope she looks for a coin,
or a sip, to ward away the shame.
Too hide the pain of life,
Done living on the game.
The want to wash away reality,
Replace life with dreams and cheer.
Or deathly silent moments
That  dull the pain and fear.
We judge them so lightly
Label them; and sneer.
Not seeing their plight,
We rarely  shed a tear.
So why not hovver in that doorway,
Stoop, and smile to say hello
Because they are only human
With no other place to go.

END_OF_DOCUMENT_TOKEN_TO_BE_REPLACED

My year was up, working in India wasn’t real work, Mum said. Never mind the heart breaking Journey to the railway station in Salur. Where I was to choose three children amongst the crowd that huddled together, with their kohl blackened eyes and swollen bellies that silently pleaded. Three bodies burned on the pyre as HIV and Tuberculosis claimed them, leaving three beds free.

The Government bod I was with, covered his nose and mouth from the stench as we ploughed our way through the filth. You can’t choose, it would catch your heart and rip it out, yet I searched the faces and touched three children of varying ages, then we left for the home.

I knew many would die there beside that track; by the time we had bathed and soothed the lucky three they’d be gone.

A stone marked the spot where a piece of me died in Salur, but it wasn’t
proper work said Mum.

Posted from WordPress for Android

I am sat on a path with a comb in my hand,
Made myself nice I teased every strand.
I buttoned the bag that serves as my coat,
Tied a cloth neat at my throat.

I sit very still to not cause alarm
Smiling, for I wish you no harm.
This is my home the space by a door,
It’s where I live because I am poor.

I won’t force your gaze upon my face
as you pass me by with heads low in case.
I sit on the path with my comb in my hand
I am Wishing you didn’t
have your head in the sand.